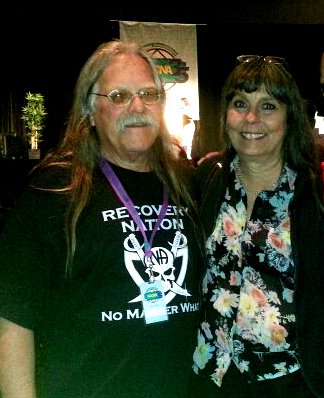 We hope you enjoy your visit to our site.  We are long-time, active members of Narcotics Anonymous. We found recovery in Greater San Jose NA and raised our four children there. After the kids left, we moved to Grants Pass, OR and lived there for 12 years. We now live in the forest in Magalia, CA. We had a store in Grants Pass and after eight yrs. closed it down in 2013 to focus full time on internet sales and traveling to NA events.  Owning a store helped us develop a very diverse and unique offering of NA products.  We now have the broadest and most diverse selection of NA merchandise on the West Coast.

Looking For A Vendor For Your NA Event?
We are an NA licensed vendor (#WE080203). We would love the opportunity to sell merchandise at your event. NA members really like our traveling store because we offer such a wide variety of unique and affordable items, starting at $0.50, something for everyone. We are very flexible and will cooperate with your committee to meet your needs. If there are certain items you prefer we not sell, we will easily make adjustments.  Here's a partial list of events where we provided our contract services:

We have an impeccable reputation with Honesty, Integrity, Humility, and Service being the values we live by.  We truly believe we would enhance the experience of your attendees. Although most events we participate in are quite satisfied with our standard terms, we are open to negotiation.  At the very least, we hope to open a dialogue with your committee.  Bottom line, if you'd like to see us at your event, we can make it work.